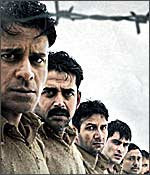 It could have been a decent film. It’s not. The basic idea (provided by the director Amrit Sagar) – of a group of Indian prisoners from 1971 Indo-Pak war whose fate hang precariously, seeing no sign of freedom they plan a daring escape—was not bad for a trite drama and patches of heroism. But the premise is terribly screwed up in the final script and dialogues (both written by Piyush Mishra). One feels sorry for the first time director who appears well intentioned (not playing to the galleries the usual jingoistic stuff, using just two songs and not going for a heroine when the story didn’t require it) but at the same time he seems too confused as what to hold and what to throw away. There are scenes in the film you wish they were one fourth of their length and then there are scenes you wish they were not there at all. The background score is tacky and so is the casting of the film (towards the climax characters enacting Pakistani army personnel behave as if they are in some bad college play). Mr. Bajpai carries the same expression throughout the whole film and you wonder what is he trying to convey with his wetty eyes. Though Ravi Kishen, Deepak Dobriyal, Chitranjan Giri and Manav Kaul manage to get in to skin of their characters. The only true grace of the film is the camera work done by Chirantan Das but bad films are not saved just by good camera. One hopes next time Amrit gets closer to what he starts with. He definitely can make better stuff.
Posted by azdak at Tuesday, March 20, 2007

ur review made me laugh. its such an intrsing film. for 2hrs u think nothing but gt engaged in their story. loved every bit of it. n here's atleast oen new guy trying to say something new. not following any conventions of bollywood.

its a gr8 film.. i think u hv no knowledge of films.. so better stop writing reviews