Two and Half Films… 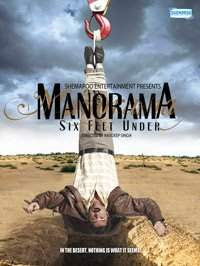 Having been stuck by monetary troubles, later on rescued and taken to theatres by UTV ‘Khosla ka Ghosla’ (2006) is quite an amusing and titillating film about life and living in Delhi. Other than the last half an hour or so when the elder son plans and executes to get back the money stolen from his family by the baddie land mafia, the film runs pretty smoothly with nice character etchings and intelligent dialogues. Till date the six films that Jaideep Sahni has written, three (Company, Chak de! India and Khosla ka Ghosla) are quite decent accomplishment. Even actors do their part pretty all right. Its first film for director Dibakar Banerjee. We should hope to see more interesting outputs from him in coming years.

The second film, ‘Manorama Six Feet Under’ is a also a first film for director Navdeep Singh written with Devika Bhagat. Though considering it to be a thriller, the writing could have been more tight and intriguing. Writers mix up the laid back set-up with the story telling as well and the ploy kills the viewers’ interest for the whole two-third of the film. The film moves tiredly and a flat performance by Abhay Deol hardly infuses with any warmth or intelligence. Though it’s a pleasing to watch Vinay Pathak, Gul Panag and Raima Sen in cameo roles. The camerawork by Arvind Kannabiran is very impressive. But watching the film one feels one is in company of a good and sensitive director. Lets wait and see what twists and turns Navdeep gives us in future.

The remaining half film that I am going to write about is not by a first timer. Its more expensive, more ambitious but after first three minutes or so, one realizes its going to be a hopeless journey. In fact it doesn’t even become any journey as it just refuses to go anywhere. Whatever the prmos, producer say or media blabbers about, the film doesn’t have a story. It doesn’t even have a sequence worth mentioning about. The whole thing is just a compilation of glossy images hopelessly going nowhere. Well, it’s pretty ‘Khoya Khoya…’ whatever.